A perennially tricky problem in compensation is the principal-agent issue: at a given company there are some people who provide capital and others who are stewards of it, and their goals don’t always align.

The history of compensation is a long history of trying to get them to think about things in the same way, so the company wastes as little effort as possible on zero- or negative-sum wealth transfers and spends as much time as possible on wealth maximization.

The usual way this is framed is in terms of getting employees to think like owners. Though it's worth noting that founder-friendly term sheets and a commitment to backing founders both try to solve the problem in the opposite direction: getting owners to think like employees, or at least eliminating a set of possible scenarios where their interests can diverge. In an ideal world, owners and employees would have similar economics such that there isn't a direct conflict between them, but there are three issues with this:

Balancing points 2 and 3 is possible in theory, but financial history is riddled with attempts to do it right with varying degrees of success. Like most other phenomena, employee equity and stock options are much older than one might think: the British East India Company had a sort of reverse equity compensation scheme: shareholders could vote for directors, and the company's directors controlled hiring for jobs, so shareholders tended to vote their shares in favor of directors who would promise them jobs later on. This was not especially great for managers’ performance.

Meanwhile, the Dutch East India Company led to the creation of a vibrant market in shares, futures, and derivatives; Joseph de la Vega’s Confusion de Confusiones has a section that not only discusses trading options but also delta-hedging his exposure when he changes his mind. Even in 17th century Amsterdam, there are traders who don’t know the theory all that well but are experts on the practice.

The worlds of tradable options and equity compensation took a long time to converge. In 1902, the newly-organized US Steel created a "Stock Subscription and Profit Sharing Plan," which gave employees the opportunity to buy shares at below-market prices, to defer payment for up to three years, and to get a bonus if they held for five years. This was partially a way to align employee incentives with investors', but had another important angle: US Steel was formed through what was essentially a series of leveraged buyouts of steel companies, so its major shareholders had large, levered positions in the stock and were eager to sell. The five-year bonus plan was partly a way to lock up shareholders so there would be less net selling pressure.By the 1920s, over seventy thousand US Steel employees took advantage of the plan each year. Being able to borrow money at no interest on a non-recourse basis to buy stock is functionally equivalent to owning a call option struck at the price of the stock—the holder gets all of the upside but doesn't face the downside. 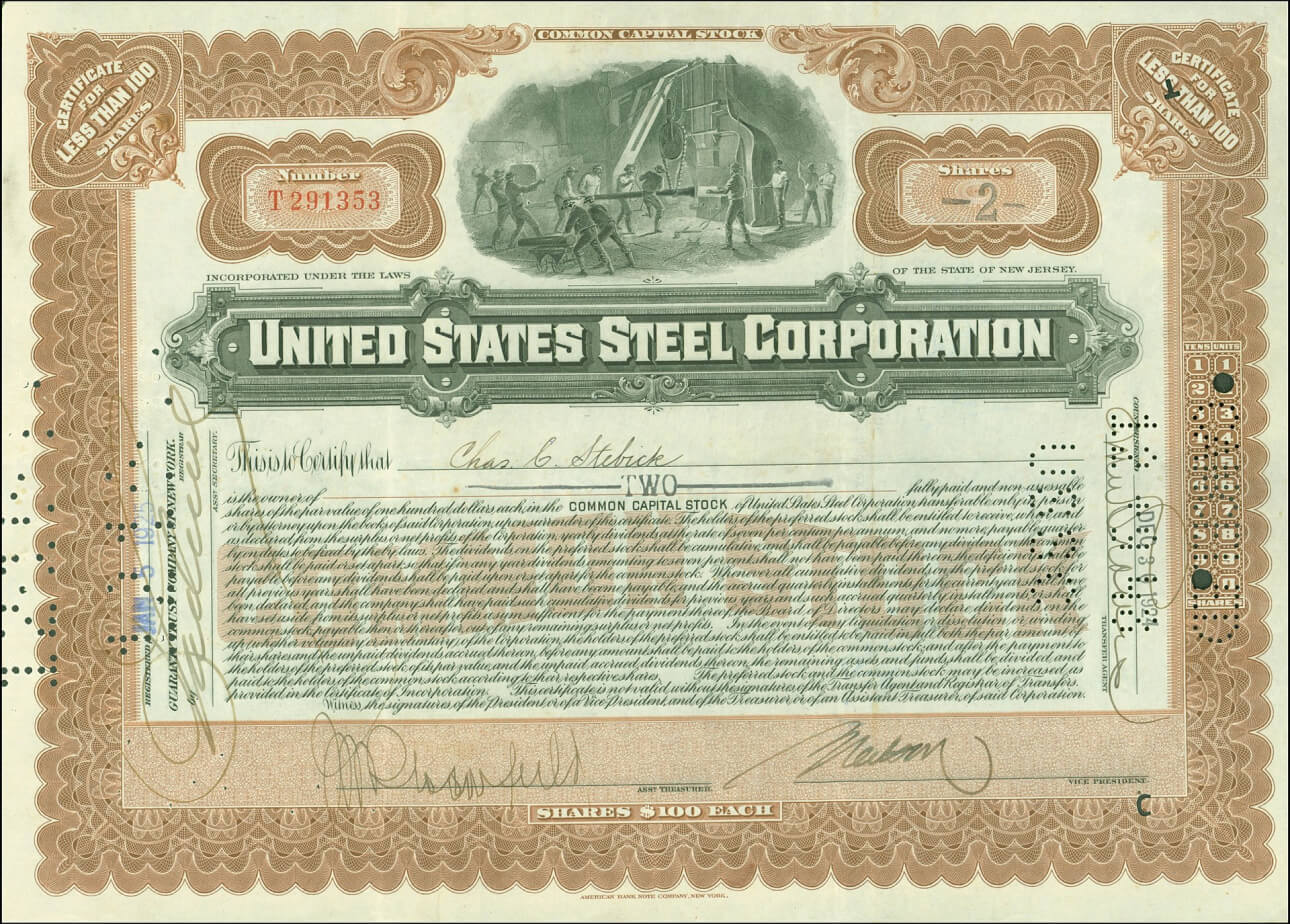 The eventual combination of stock options as a tradable asset and equity-based compensation as a way to motivate employees finally came together in a more permanent way in the 1940s, when part of the motivation in question was taxes. High tax rates create all sorts of surprising incentives, ranging from efforts to lose money on paper with oil and cattle, both of which had associated tax benefits, to paying employees in fringe benefits rather than salary (executive dining rooms, company cars, and the three-martini lunch are all artifacts of this) to, more recently, trying to frequently realize losses on crypto transactions because wash-sale rules don’t apply ($, WSJ).

And, in the 1940s, one of the tools available to companies was the stock option: In the late 1940s, marginal taxes rates for many executives were around 80-90%. The Revenue Act (1950) introduced ‘restricted’ stock options (later called ‘qualified’ or ‘incentive’ options) and this new option was only subject to capital gains tax, which was 25% and paid at the point of disposal of the stock. Before this, stock options had been taxed as income, and so there were no advantages to receiving them as part of compensation. In 1950, almost no executives in the sample tracked by Historical Trends in Executive Compensation were granted stock options but in 1951, 18% of executives received restricted stock options as part of their compensation.

Stock options were getting more common outside of the executive suite in the 1960s. Litton used options, so when Henry Singleton left that company to found Teledyne, he brought the practice along. Ling-Temco-Vought, which acquired companies and then spun off tracking stocks for their more interesting divisions, would compensate the heads of those subsidiaries with stock options on their own company instead of the entire firm. In The Money Game, written in 1968, the author complains that it’s hard to get accurate gossip from talking to engineers at tech companies, because they all own options (so they want to hype their own company) and because they’re also just as market-obsessed as the investors pumping them for ideas.

When companies go public early in their lives, it’s relatively easy to decide where options should be priced. There's a market price for the stock, so there's a natural strike price for the options, and better tax treatment for options granted with a strike price equal to the market price. And its volatility is measurable, so it’s easy to apply Black-Scholes and get a valuation. But for private companies, pricing options involves some guesswork. And it used to be lucrative guesswork: underpriced options a) were a cheap form of compensation, and b) meant that anyone investing using a tax-free but capital-constrained vehicle could use it to acquire some very affordable options.

Options used to be valued through rules of thumb; this piece says the usual rule was that common stock was worth 1/10th of the valuation of the preferred stock. A rather low number! Since common stock is junior to preferred, it functions similarly to an option, but startup outcomes are pretty binary, so the common stock will either be worthless or have a value that converges on the value of the preferred, at least the early rounds. As Chris Dixon pointed out a while ago, if you plug a startup-appropriate level of volatility into the Black-Scholes model, you get options that are basically worth as much as the underlying assets, and the same math applies to preferred. The intuition here is that liquidity preferences are basically the “strike price” at which common stock is in the money. Take two companies: one has 10m common shares issued for $1 apiece, and 10m options with a strike price of $1. Up to a $10m exit, the common stock gets 100% of the returns, after which they're split 50/50. Now consider a company with $10m in preferred with a 1x liquidation, and 10m common; the payoff functions are the same. So options on common stock in a company with liquidation preferences are, in a sense, an option on an option, although the second layer of optionality doesn't matter for economic purposes so much as for the taxes.For basically unrelated reasons—Enron managers preemptively executing stock options to cash out during the company’s collapse—the rulebook on stock options was totally rewritten in 2004, adding rule 409(a) which required that companies make some effort to value options rather than use a rule of thumb. (The rule of thumb turns out to be a little off, but at least to have a directional correlation: 409(a) valuations tend to be 30-40% of preferred valuations.)

This has created a small industry of firms that perform valuations for early-stage companies so they don't accidentally trigger tax penalties. It ends up functioning as, essentially, insurance: pay a few thousand dollars each year in order to avoid paying a much larger penalty later. 409(a) valuations are still fairly subjective, especially in the earliest stages, and there's room for management to push the values down. Subjective features like how long it will be before there's a liquid market for the stock, which public companies get included in comparable valuations, or what metric they're compared to can work. (How much do metrics matter? A money-burning startup can't use an enterprise value to EBITDA ratio, but a SaaS company that started selling its product mid-year will have a much higher annual recurring revenue number than its sales, and even after that point sales will lag ARR if it's growing fast.)

Part of the point of setting a low value on options when it's possible is that “options motivate employees” is a claim that works at two levels of abstraction. The obvious one is the incentive issue outlined earlier in this piece: the more someone's economic rewards approximate the wealth they create, the more their interests are aligned with shareholders. But the other form of motivation is that it's always exciting to see a number go up, even if it doesn't lead to large economic rewards. So the incentive for low strike prices is not just that they marginally affect the payoff from options, but that every subsequent valuation can go a little higher by closing the gap between the 409(a) valuation and the real value of the options.

Momentum is a signal that investors and employers respond to; it produces some excess returns in public companies, and it affects behavior in private ones, too. So the basic logic behind under-pricing options remains the same even as the details change. It's a lot easier to keep people motivated when they own something that used to be cheap and has gone up a lot since then—witness the élan of the laser-eyes crowd—and that’s easier to accomplish when there’s some room to set the price.